Heard on the Radio This Morning

It's simply frightening how many know-nothings we have in this country on both the right and the left.
Posted by Caitlyn Martin at 8:15 AM 1 comment:

It seems that 20% of Americans have either ditched cable TV or are planning to do so:

"9 percent of people have already cut the cord and 11 percent are considering doing so because they can watch almost all of their favorite shows online."

Those same people might find they could get some of the remaining programs with an antenna.

I ditched cable when I moved to my present apartment almost a year ago. I was looking for ways to cut costs during a time when my income has been a bit erratic. Since digital television came along stations multicast, which means many TV stations now have 3 or 4 channels where they used to have one. I can pick up somewhere around 40 channels where I live in Raleigh. Some of the channels I receive are considered to be outside the Raleigh-Durham market and are not offered by cable or satellite in this area. My best friend in Franklin Co. (where I used to live) picks up about the same number, though the list is slightly different. 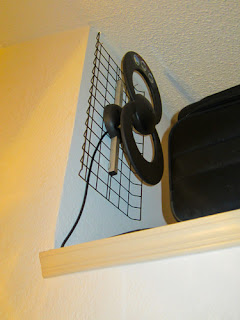 My antenna, an Antennas Direct ClearStream 2, is indoors, sits on top of my entertainment center, and gives me perfect HD reception. I live in a second story apartment. That's a stock picture. Mine sits sideways as I have very limited space between the top of the entertainment center and the ceiling. It works just fine on it's side and the extra height did seem to help a bit on one more distant station (4 channels). One month on HD cable costs as much as the antenna, which can also be mounted outdoors with even better results. As a renter in an apartment that just isn't an option for me.

There are also lots of opportunities to stream programming from the Internet for free. For example, CNN had free streaming of the last Republican debate they carried. Most of the networks will let you stream any episodes you missed from their websites as well. Hulu also offers lots of free programming including many cable programs.

If that isn't enough for you the add HuluPlus or Netflix for less than $10 per month. It's a lot cheaper than cable. I get all the TV I want to watch for free. I can't imagine ever paying the cable company again.
Posted by Caitlyn Martin at 1:18 PM No comments: