It's been a while since I wrote a CD review so I decided to write up one of the newest additions to my collection: 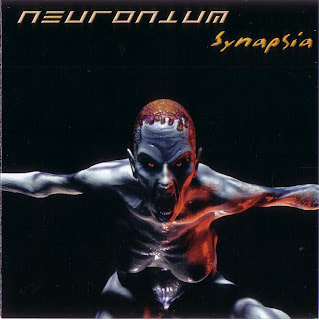 You get the idea in listening to Synapsia that Michel Huygen sat down with a stack of old vinyl LPs before recording this album. For example the third track, "Vortopsia", sounds like a recent Neuronium track for all of a minute. Then the electronic bass line kicks in and the synth melody changes and you get the feeling of some vintage Tangerine Dream in their mellower moments. The piece could have been inspired by the B-side of Stratosfear or "Haunted Heights" from '70-'80. Every track on Synapsia has an electronic bass line. Some of it definitely has that vintage sequencer driven Berlin School sound. There's a fair amount of Vangelis and Patrick O'Hearn influence as well, with a dash of Klaus Schulze here and there. Really, though, I think more than anything Huygen listened to his own early works with Neuronium.

Don't misunderstand me; there's none of the high flying space rock of The New Digital Dream. Huygen is completely on his own now despite keeping the Neuronium name. At times I wish it wasn't so. "Brainsucker" could have really benefited from the powerful electric guitar that Santi Pico brought to The Visitor rather than a synthesized sort-of guitar sounding section. All in all what Huygen has done is blend the gentler sound of newer Neuronium with the sensibilities and sounds and influences of early Neuronium. The result doesn't sound like something out of the late '70s and early '80s. The instrumentation is pure 21st century. The good news is that it doesn't sound like sickly sweet new age glop either. It's brilliant, interesting electronic music that builds in complexity as it goes. It's an updating of the early Neuronium feeling in a way that's long overdue. Synapsia is the best album released under the Neuronium name in a quite some time.

NOTE: I also posted this review to Discogs.
Posted by Caitlyn Martin at 9:41 PM No comments:

Dr. Who Is Evil

"God delivered me from the evil that is Dr Who, materialism and alcoholism."

Oh, and no, I'm not anti-Christian, really. I am anti-fanatic though. I'm also looking forward to the fourth season of the new Doctor Who, the 30th season overall.

Technorati Tags: doctor who dr. who evil religion christianity
Posted by Caitlyn Martin at 8:18 AM No comments:

Stand With The People Of Tibet

When I checked my inbox this morning I was surprised to see an e-mail from Hans-Joachim Roedelius. Herr Roedelius is one of my favorite musicians. I met him in person at a performance he gave in Asheville, NC in 1999 and I have corresponded with him a couple of times, most recently after I expanded the WikiPedia page for Cluster. Herr Roedelius was kind enough to provide a photo and to fact check the page for me.

It turns out the e-mail contained a link to Avaaz.org urging people to sign an online petition to be delivered to Chinese President Hu Jintao on March 31. The petition urges restraint, respect for human rights, and the opening of a dialogue with the Dali Lama. While I have little hope that the Chinese government is at all open to or moved by international public opinion I certainly see no harm in signing the petition. Avaaz.org wants at least 2,000,000 signatures and they are more than 80% of the way there. Who knows? Maybe, against all odds it will even do a little good.

I encourage everyone to take a couple of minutes to sign the petition.

I also thank Herr Roedelius for championing this issue and giving me the opportunity to do what I can.