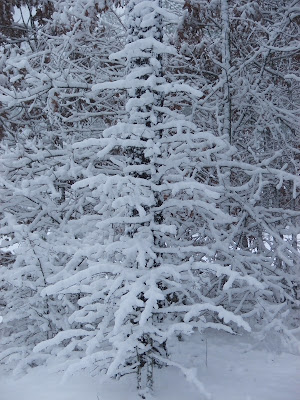 As of 10:30 this morning we still have a few flurries in the air but otherwise the snow is probably over. We got about 3" (8 cm) of snow in all which is a big deal in North Carolina. Folks further west got quite a bit more than we did. In this area schools are closed, events have been canceled and businesses delayed opening. As I mentioned yesterday people up north find this funny. In New York or Wisconsin 3" of snow is no big deal. Here it dominates the news.

One thing for certain is that it is cold with temperatures likely to stay below freezing today. Right now it's 29°F (-2°C) and it is expected to drop to 13°F (-11°C) tonight. Roads will probably become quite icy in time for the morning commute tomorrow. 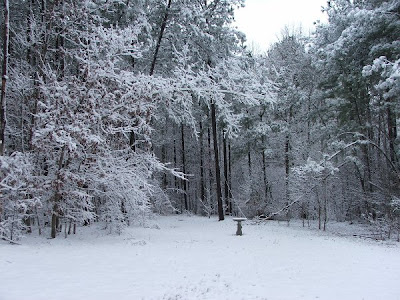 The photos were taken by my housemate in the backyard this morning taken around 8:30 this morning. It is pretty around here and the coffee is hot.
Posted by Caitlyn Martin at 7:27 AM No comments:

Snow Again! (...or a conspiracy to sell more bread and milk) 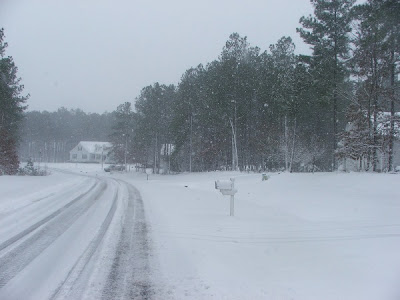 Back in January we got a little over 5" (13 cm) of snow. The picture above is what my street looked like after a plow came through. Looks pretty, right? My housemate and I thought so and we went out for a walk and she took some pictures. We get a snowstorm like this maybe once every three to five years where I live. They predicted a second big storm last month but all we got was a dusting.

Actually they predict several of these events every year but most never materialize. My housemate claims to believe this is a conspiracy concocted by retailers and meteorologists to sell more bread and milk. As I noted last November supermarkets are jam packed before every would-be snowstorm and they always sell out most all of their bread and milk.

Well... depending on which media outlet or meteorologist you believe we should be getting anywhere from 2" to 8" (8cm to 20cm) of snow tonight and tomorrow. Right now it's just raining but this is supposed to become snow and, by North Carolina standards, lots of it, as in enough to paralyze the area.

Yes, folks who live up north in snowy climes or came from the north like I did find it all very humorous. It's funny until you see the locals try to drive on snow or ice. Then it's not so funny and you want to stay home as much or more than they do.

Anyway, I did go to the market today and yes, they were busy. They still had plenty of bread and milk. I guess there is less panic buying during a depression. (Yes, I still believe our "economic crisis" or "most severe recession in 70 years" is really a depression. More on that in upcoming posts.)

Will it snow? Probably. Will we get lots of snow? Who knows. They're even predicting "thundersnow", a thunderstorm with snow instead of rain. I've never seen that, even when I lived up north.

In the meanwhile here is another pretty picture from January taken a few minutes later during our walk a bit futher up my street: 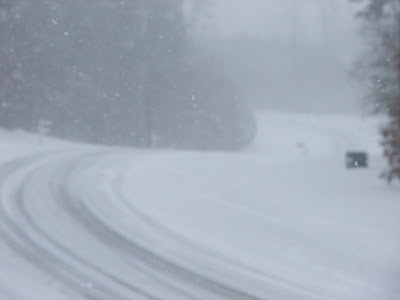 It wasn't quite as pleasant a walk at this point. We'll see if tonight and tomorrow bring more of the same. If they do I'll try to get some more pictures.
Posted by Caitlyn Martin at 2:34 PM No comments: