Big Business is NOT Creating Jobs; Corporate Tax Breaks are a Huge Waste of Money

Republicans keep telling us that only the private sector can create jobs. They claim, time and again, that reducing corporate tax rates and giving huge tax breaks to big corporations creates jobs. Maybe, once upon a time, there was a degree of truth to the idea. In today's economy it's pure bunk.

I'd like to share a recent example from here in North Carolina. Apple built a new, huge new data center here. How many jobs did that create? A whopping 50! That's right, there are only 50 new jobs there. Let me quote from an article on Yahoo! Finance, which is originally from Business Insider:


"Apple has chosen to manufacture its products where it can manufacture them most efficiently--outside the U.S. And Apple's shareholders are benefiting accordingly.

But the point is that the hope that a few more companies like Apple, Google, and Amazon will restore the U.S. economy to its former glory is misplaced.

The companies create amazing products and vast shareholder wealth, but they don't spread this wealth around as much as earlier industrial giants did."

Please note that I deliberately chose an article from a business publication, not a left-leaning political site. It seems even business reporters can see the truth now.

So, how can we create more jobs in this country? It's not all that hard: you hire people. It worked for FDR in the 1930s and it can work now. No, government hiring for public works projects didn't end the Great Depression, but it did reduce unemployment from nearly a third of the workforce down to 12%.

First, start by rehiring the teachers, firefighters and police officers who were let go because of state and local budget cutting and the end of stimulus funds. The "Teachers and First Responders Back to Work Act of 2011", originally part President Obama's jobs bill, would have done that. It was blocked in the Senate by every last Republican, one independent (Joseph Lieberman) and two conservative Democrats (Bill Pryor and Ben Nelson). Polling shows that an overwhelming majority of Americans do not support the cuts to education and to first responders. The cost of the bill would have been $35 billion.

Second, rebuild our crumbling infrastructure in this country. Even the pro-business, conservative Chamber of Commerce endorsed President Obama's call for more investment in our nation's infrastructure. Once again, public support is there for repairing and building roads, bridges, the power grid, and other needed projects. Once again, the Republicans blocked the bill in the Senate. The cost would have been $60 billion.

Bare in mind that Republicans opposed closing tax loopholes on the wealthiest Americans to pay for these bills. I still have yet to hear a rational explanation from Republicans telling me how tax the breaks they defend for luxury yachts, private jets and second homes is good for the economy or will create jobs. I do know that employed people, whether in the public or private sector, spend money which helps businesses profit, creates more jobs and, in turn creates more consumer spending. Employed people pay a heck of a lot more in taxes than unemployed people too, which reduces the deficit. Coming back to my original point: corporate welfare, whether it's subsidies for oil and energy companies or tax breaks to build a new data center, are a huge waste of money which does nothing for ordinary taxpayers but does enrich a small slice of the top 1%. Corporate welfare also increases the deficit by more than enough to pay for the two jobs bills I referenced.

The plain fact is that Republicans are deliberately tanking the economy and killing job creation because they believe that people will blame President Obama and elect more Republicans next year. They are all about their own power and their wealthy and big corporate donors and to hell with the rest of us. Maybe, just maybe the Occupy movement is finally waking people up to that reality. Maybe instead of the "throw the rascals out" mentality we saw in 2010 we might just get the "throw the 1% and their lackeys out" mentality we really need. Maybe, just maybe, people will pay attention and put the blame where it belongs this time.
Posted by Caitlyn Martin at 12:43 PM No comments:

Where is the Outrage?

I've been listening to ELO lately for the first time in a long time. What does a '70s and '80s pop band known for love songs have to do with anger and outrage? 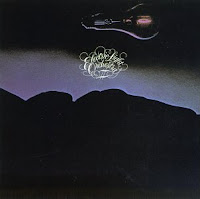 Well... my first ELO album, one of the first records I ever bought, was Electric Light Orchestra II. I got it when I was maybe in ninth grade. On The Third Day, the first pop ELO album, was out by then, but the song that had originally received lots of airplay was the seven minute long cover of Roll Over Beethoven and that's what I wanted. Once I had the album that wasn't the song that grabbed me.

When Electric Light Orchestra II was recorded in 1972 the Vietnam War was still raging. ELO gave the majority of side 2 of the record to an antiwar song called Kuiama. Band members still claim it's the best song they ever did. If you haven't heard it the word "dark" doesn't even begin to do it justice. Even the instrumental section, which runs for maybe six minutes, is dismal. Don't get me wrong, it's brilliantly done, but it is effectively written to bring out the sadness and anger and guilt that match the story. From WikiPedia:

At 11:19, it is the longest track on the album, and the longest song ever recorded by Electric Light Orchestra. It tells the tale of a soldier who has found an orphan girl wandering the ruins of a battle-ravaged village in the Vietnam war. The soldier is trying to comfort the girl and also to explain how he was the one who killed her parents.

The deeply affected vocals feature some of ELO's trademark harmonies and lots of overdubs, but they aren't anywhere near the pleasant sound the band would be later known for.

Kuia stop your cryin,
there's no bombs a'fallin
no horsemen in the night
a'ridin through your dreams
and tearing at your life
baby goodnight

Wake up Kuiama, I got somethin to tell you
it's just that I mean, well that is to say,
that I'm trying to explain but I'll start again,
for you, I must be true.

Kuia please believe me. I just couldn't help myself.
I wanted to run but they gave me a gun
and they told me the duty I owed to my Fatherland.
I made my stand.

Kuia I just shot them, I just blew their heads open,
and I heard them scream in their agony

How many real life Kuiamas are there in Afghanistan today? What can we accomplish there? Osama bin Laden, the mastermind of 9/11, is dead. So are most of his lieutenants from that time. The Taliban are based now in Pakistan, not Afghanistan. Don't worry, our drones are bombing Pakistan too.

The government we support in Afghanistan stole the last election and has little popular support in the country. We Americans are absolutely hated in both Afghanistan and Pakistan. There is no longer any possibility of a good outcome, much like Vietnam in the early 1970s. President Obama says we will be fighting there for another three years. Why? Some Republicans excoriate the President for setting a departure date at all. They want us to stay and keep killing until the mission is accomplished. What mission? What on earth can be accomplished other than more needless deaths?

Where is the outrage that caused Jeff Lynne to write a song like Kuiama? Where is the horror at the senseless loss of life that goes on day in and day out. What possible purpose can it serve? What "victory" can we achieve?

Two Republican Presidential candidates, former Utah Governor John Huntsman and Texas Congressman Ron Paul, actually have the right answer: get out of Afghanistan and withdraw now. They are the modern equivalent of Senator George McGovern (D-SD) in 1972. Like Sen. McGovern they have no chance of winning. Heck, they have no chance of being nominated. The leading Republican candidates according to the polls are the most bloodthirsty of the bunch.

Have we, as a society, become so numb to the horrors of war that we just accept it? Where are today's protest songs? Why are we seeing people protesting Wall Street and greed and the corrupting effect of unlimited money flowing into the political system (which are worthy of protest) but nobody protesting a decade of unrelenting war? This 40 year old song can still stir emotions. Maybe people need to listen to it again.

Posted by Caitlyn Martin at 1:29 AM No comments:

As Bad as Things Seem...

This week, just before the Thanksgiving holiday, I learned that the company which had been my largest customer this fall had filed for bankruptcy and closed their doors. They were a wholesaler/distributor and the Christmas orders from retailers never came this year. Oh, I'm sure they had some but sales were so low compared to previous years they simply could not stay in business. The newly unemployed former IT Director, my main contact there, gave me the courtesy of a call to let me know. He's in his upper fifties. His job is not going to be easy to replace, especially in this economy.

As frustrated as I am at times with the direction I see things moving in I know that they could be much worse. I, at least, still have some customers and some income. The lights are on, the heat is running when needed, and I know when my next checks should arrive. My income isn't what it should be, but considering how many people are unemployed, some for a very long time, I'm fortunate by comparison.
Posted by Caitlyn Martin at 9:45 PM No comments:

I think about three years have passed since I posted a review of a CD from my collection to my blog, and I don't think I've ever taken the time to review one of the classical albums I occasionally enjoy. Before returning to politics and news and other weighty matters I thought it might be nice to write about a CD I really like. 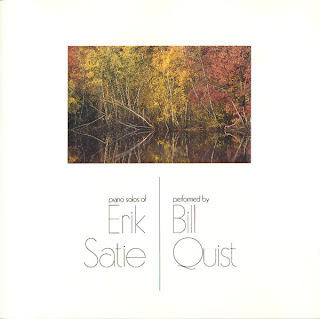 More than 30 years after it's initial release, this recording still stands up as my favorite of Erik Satie's piano works. Recorded in a studio rather than a concert hall, it has a rich and full sound and the works are performed beautifully. Windham Hill wasn't known as a classical label. This may be their only true classical release but it is an outstanding one. Brian Eno refers to Satie as the father of ambient music. That may fit for some of the pieces but I sure wouldn't want to try to nod off to Bill Quist's forceful perfomance of Ogives #1. Some of Satie's compositions selected here are delicate and beautiful, of course. In general, this is an excellent selection of his short piano works performed by a pianist associated with the San Francisco Symphony.

I should note that this album has been out of print for years. Used copies are usually available from Amazon.com and other websites which carry used CDs. Highly recommended.

NOTE: The main part of this review has also been posted on Discogs.
Posted by Caitlyn Martin at 12:52 PM No comments: