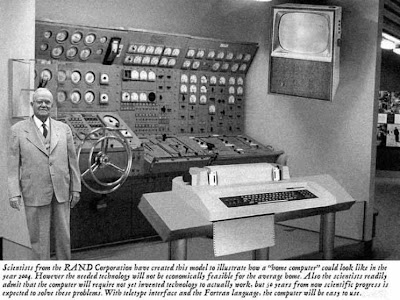 Please click on the image to see this in all its glory and to read the caption. Yep, that teletype interface sure makes it easy to use, doesn't it?

Thanks to WinDoze on the Vector Linux forum for digging up this gem.
Posted by Caitlyn Martin at 11:34 AM 12 comments:

In my last post I wrote about the premature failure of my Sylvania g Netbook. I also noted that the dealer, J&R Music World of New York City, offered an immediate exchange. I called to follow up this morning and I should have my replacement on the way very shortly. I also am being reimbursed for the shipping and insurance charges to return the netbook. In addition the price has dropper by $40 since I ordered mine and I am, in fact, receiving a $40 credit as well. When all is said and done I will have paid $239 for the computer, a price that is still available today.

First, kudos to J&R Music World for their outstanding customer service. Second, if the new computer works as expected I will have gotten a very capable little laptop for a truly minuscule price. $239 for a system with a 1.2GHz processor, 1GB of RAM, and a 30GB hard drive is impossible to beat. Oh, and yes, it runs Linux.
Posted by Caitlyn Martin at 8:56 AM 4 comments:

The Netbook Experience Is A Little Less Shiny Right Now

During the holidays I received some Hanukkah gelt from family specifically earmarked for buying myself a new computer. The Toshiba laptop I'm writing this on is six years old now, it's slow by today's standards and it has developed a highly intermittent harware problem. Sometimes, out of the blue, it will shut itself off for no apparent reason. Since having a reliable and portable computer is vital for me to make a living right now a replacement was the best gift I could possibly get. A netbook seemed like the perfect solution to me and I ordered the one that seemed to give me the most power for the least money in a very small and lightweight case: a Sylvania g Netbook.

For the first couple of weeks I was thrilled with the little laptop. I was less than pleased with the stock gOS Linux implementation but once I replaced it with a Linux distribution that actually had the proper support and drivers for the hardware I was really, really happy. I used the little Sylvania for everything. Then, like the Toshiba, it started having an intermittent problem. It would lock up for no apparent reason. I went back to the stock gOS configuration and it still locked hard at random times.

I bought the netbook from J&R Music World in New York City via Amazon.com. Kudos to J&R for immediately authorizing an exchange and promising that they would ship a replacement within 24-48 hours of receiving my defective unit. J&R is a long established brick and mortar store that I shopped at when I lived in New York. They have an excellent reputation for customer service and it seems to be well earned so far. They also had some of the best prices on netbooks when I shopped for mine. So... the replacement should be here next week some time.

In the meanwhile I'm back on my old computer. Having worked on the Sylvania for two weeks this one really does seem slow now despite only a small difference in the processor (1.2GHz Via C-7M ULV in the netbook vs. 1GHz Intel Celeron in this one). Of course the fact that the netbook had twice the memory (1 GB vs. 512MB RAM) is probably a big part of the performance difference.

Back in the 1980s I did work for a major electronic manufacturer. I learned back then that 90% of electronic failures happen in the first 5% of service life. What happened with my netbook is just plain bad luck. It could have happened with a Dell or an HP or an Asus netbook. In any case it would have been handled promptly under warranty. I certainly don't blame Sylvania at this point. I really have nothing to complain about. OTOH, it's always frustrating to have something new fail like this. For me, temporarily, the shine is off the netbook experience.

I have written a detailed review of the Sylvania g Netbook for O'Reilly Broadcast but for the moment I'm not publishing it. I want to make sure the replacement works as it should before I publish my opinions on a large public tech forum. I expect the review will go out pretty much unchanged but... Yeah, things just aren't shiny right now.
Posted by Caitlyn Martin at 2:34 PM 3 comments: