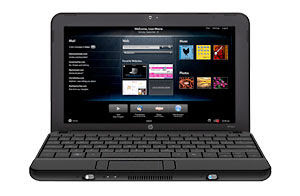 10 days ago I wrote an article for O'Reilly about the premature failure of my Sylvania netbook. I ended up deciding to buy an HP Mini 110 Mi Edition (more on my choices soon) and ordered it custom built to my specs directly from Hewlett-Packard. It was competitively priced (and slightly less expensive than what's on HP's website now) and I was promised that the netbook would ship within six days. The turnaround time was much better than what Dell offered. I've read mainly positive reviews of this particular netbook, including one by Ladislav Bodnar on DistroWatch Weekly. As many of you probably know I write fairly regularly for Ladislav and I definitely to respect the man and his opinions. The netbook did, in fact, ship on the sixth day: from Shangai, China.

I knew that most if not all the netbooks, laptops, and notebooks sold today are built in a handful of factories located either in mainland China or Taiwan. I was under no illusion that buying an American brand name meant an American product. What surprised me is that HP apparantly doesn't even have stock of this netbook in the U.S. and doesn't even do simple customizations here.

In recent weeks Dell announced it was closing a Winston-Salem, North Carolina manufacturing plant and giving the work to "third parties" in Mexico and other countries. Despite President Obama's campaign rehtoric about keeping American manufacturing jobs in the United States companies keep outsourcing the work offshore or moving their own facilities to other countries with less expensive labor costs, poor or no environmental regulations, and little or no protections for workers. Meanwhile unemployment in the United States continues to rise. Here in North Carolina our unemployment rate is well above the national average.

I see this continuing loss of American manufacturing capacity, which is already a small fraction of what it once was, as a long term disaster for this country. Anyone who knows their history knows that when the U.S. entered World War II it rapidly converted the then unmatched manufacturing facilities to wartime production very quickly. If a major world conflict started today or in the near future I fear that we have no ability to do the same thing again. A pretty smart guy named Albert Einstein, who was a pacifist prior to the Second World War, held much more pragmatic views after the rise of Nazism. He famously said, "So long as there are men there will be wars." Sadly I believe he was right. That makes it the height of foolishness to leave the United States in a position where it cannot be ready for war quicky no matter how much we value peace.

I've come to believe a little protectionism would go a long way, particularly when it comes to industries vital to our economy, our defense, or both. I am mindful of history and the last thing I'd want Congress and the President to do is pass something like the Smoot-Hawley Tariff Act during a deep recession or what, I believe in retrospect, we will call a depression. The last thing I want to do is severely curtail international trade. Having said all of that I am no longer the believer in free trade that I once was. I do feel trade will need to be a little less free and a bit more regulated to insure both American jobs and American defense capability.

The kind of severely under-regulated free trade we now have has meant lower prices for consumers. The fact that my new computer is made in China is one of the reasons it is so inexpensive. I would gladly pay more for one made in the United States. I can remember when this country was the leading manufacturer of personal computers. Today, to even recapture a small share of PC manufactuing in the U.S. would require government intervention.

Every President we've had since Ronald Reagan, Republicans and Democrats alike, have repeated the mantra of free trade over and over again. I wonder how Republicans who claim to be so concerned about national defense can justify promoting the wholesale export of manufacturing which has happened over the past 30 years. Similarly, I wonder how Democrats who claim to be so deeply concerned about the environment and workers' rights can do precisely the same when many of the countries which have succesfully imported manufacturing capacity and jobs have no such concerns. Any claim of concern about human rights by either party, by liberals or conservatives, rings hollow when we export our jobs and manufacturing capacity to countries that have abominable human rights records. It seems corporate profits and corporate lobbyists trump any and all other concerns. Greed remains the real G-d of early 21st century America.

It's way past time we examine the real costs of "free trade" instead of just parroting well worn lines about the benefits. I think if we do an honest cost-benefit analysis of free trade we will find that it is anything but free and, indeed, may do more harm than good as it is structured today.
Posted by Caitlyn Martin at 11:20 AM

What do you think we would need to manufacture in time of war that we can't manufacture now? Remember how long the lead time is for ordering military gear, let alone the manufacturing lead time once an order has been let.

@Phil: Prior World War II we had a great deal of heavy manufacturing capacity which we rapidly converted to wartime production. There was no long lead time for anything because the demands of the war required massive and rapid production and we had the capacity to do that in this country. We don't have that capacity today and I fear we could not respond to circumstances similar to those at the time the U.S. entered World War II. I can't answer your question about what specifically we would need that we couldn't build quickly; I am not an expert on current military systems. I do know that any number of military experts have warned about the danger of losing our industrial and manufacturing base and it is foolish not to heed those warnings.

While I'm no expert either, I suspect that in this day and age that the lead-in to a war and the war itself will be so brief that manufacturing capacity would not be an issue for the US. The war is likely to be over before any newly manufactured arms could be delivered to the soldiers.

Even if there was a lot more manufacturing capacity here, I think that most of it would be for commercial items, which are even less suitable for making military items than in the past. Converting an automobile manufacturing plant to make jeeps or tanks is a lot more straightforward than converting a plant that is making laptops or DVD players to making anything remotely useful to the military.

Also, the conversion of manufacturing capacity to wartime production in the World War II era was not as quick as you might think. There was a long period of conversion and ramp-up prior to when America entered the war. The buildup of weapons started in the mid-1930's, more than half a decade before America entered the war. As an example, the US started laying down new battleships (the North Carolina class) in 1937, after a hiatus of around 15 years. We were developing and procuring arms at a fast and furious pace long before entering the war, although the pace did pick up substantially after the attack on Pearl Harbor. We were not relying on our latent manufacturing capacity, instead we were deliberately building up and preparing for war long before entering it. I think that it is clear the the buildup was justified at that time, but I don't think that it would be appropriate now (not that I think that you were suggesting that).

In summary, I do have concerns about the loss of manufacturing capacity, but not because of anything directly related to defense. My concern is more that we are turning into a nation of lawyers and marketeers, and working with one's hands is becoming such a low-reward occupation in terms of both recognition and pay that there will be economic problems in the future.

I disagree with you about, well... a lot of what you wrote. The idea of a very short war only applies if WMD are used. The U.S. has been in Afghanistan for more than eight years and Iraq for more than six. I would argue that one of the reasons Afghanistan has dragged on so long is that insufficient resources were given for a long time as the Bush administration concentrated on Iraq. Conventional wars can and will still be long and bloody.

I also disagree with the idea that electronics manufacturing couldn't or wouldn't be converted to military use. You talked about tanks and jeeps and nowadays those contain computers as do most sophisticated weapons systems. Electronics manufacturing is one thing we desperately do need to bring back to this country and is an excellent answer to the first question of your first comment.

We have been ramping up the military to some extent since shortly after 9/11. While I don't think this is quite analogous to the period where FDR wanted to enter the war against the Nazis but couldn't for political reasons I do think there is some parallel in the sense that groundwork has been laid and that we could move to wartime production fairly quickly. Despite being engaged in two wars President Bush failed to move this country to a wartime footing when he had the support to do so, something I have long criticized him for. Given another attack on this country, something I do believe is all but inevitable, President Obama would find the same sort of unity and will among the American people.

I certainly agree with you about the long term economic consequences of the loss of manufacturing capacity and that was certainly part of my post as well. I also believe defense is a reasonable reason to be concerned and it is the reason most likely to get moderate to conservative voters in this country to decide that a change in direction is needed.

war war war. America is locked into its destructive mantra. perhaps time would better be spent looking into ways in which America can produce goods (if that's where you want to have this debate about) that actually benefit the world, rather than inflict massive suffering for the benefit of the world's most privileged nation.

Congratulations, Myles, on the most ridiculous comment in my blog for a long time. Tell me, when a nation is attacked an its citizens are killed, as was the case on 9/11/2001, what is a nation to do but defend itself? The main reason we are still in Afghanistan is that we did not put enough resources into war. I would also say that preventing the spread of radical Islam benefits the entire free world, even if you cannot see it.

Oh, and wars stimulate economy and production. If that is the only issue (and it is what the article was about) then war would be, in that one respect, a good thing. War is never good, of course, but sometimes it is the lesser of two evils.

Take your anti-Americanism somewhere else. It will never be welcome here.