I Ate Kale and It Didn't Kill Me

I have a great friend. She's becoming more health conscious and is doing a great job of losing weight. The one problem she has is what she likes to eat. Her idea of eating green is mint chocolate chip ice cream. She will tell you that she eats vegetables because she eats potatoes. Seriously, if it's a green vegetable she hates it. If it's fish she says it will make her throw up. She's a meat and potatoes type... and pizza. Pizza is a major food group for her. None of this sounds like a healthy diet, does it?

Me, well... I like most vegetables and I eat lots of them. The ones I really don't like I can count on the fingers of my right hand and still have fingers left over. I hate asparagus. I really don't like endive. Kale (and most greens) taste bitter to me. Why have kale when you can have spinach? I like spinach. 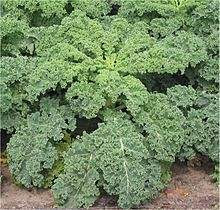 Imagine my surprise when my meat and potatoes friend calls me asking for kale recipes. Kale? She's going to eat kale? She read somewhere that it's a super food and really good for her and she wants a way to prepare kale that will taste good to her. Oof! Almost any other vegetable and I would have clever ideas. Spinach recipes, I have endless spinach recipes. Kale? I've got nothing.

I've never been one to shy away from a good challenge and I need to lose weight too. If kale is this super food then maybe I need to learn how to make tasty kale, right? Sure. My first attempt, suggested by Bobby Flay online, didn't turn out so well. Maybe I didn't cook it enough, or maybe just garlic isn't enough to mask the bitterness, but let's just say I didn't eat it. I also found raw kale salad suggestions. I'd rather eat newspaper. It isn't as bitter and the texture is better.

Tonight it turned out the third time was the charm. I sauteed the kale in very good Halutza extra virgin olive oil from Israel. I used more garlic. I added chopped green onion. I also used Heritage Fair Greens Seasoning. I cooked it longer and got it a bit softer. It really wasn't bad at all the way I made it. My main dish was vegetarian Tofurkey Italian style sausage and peppers (three kinds) with mushrooms, fresh tomatoes, yellow squash and green onion in a tomato based pasta sauce over Jewish style egg noodles. It ended up being a nice dinner.

OK, I ate kale and it didn't kill me. I have a tiny bit left over in a Tupperware in the fridge. I wonder if it would be good in an omelet in the morning. Hmmm... [Photo courtesy of WikiMedia Commons]
Posted by Caitlyn Martin at 9:17 PM 1 comment: