We had a White Hanukkah and a White Christmas

Hanukkah was in early December this year and we had an inch and a half of snow on that Saturday. What was unusual was that it stayed cold and the snow stuck around for a week. That just doesn't happen in the Piedmont of North Carolina in a normal winter. Anyway, we had a white Hanukkah which was kind of nice. In typical Southern style an even smaller snowfall (0.8", 2 cm) meant no mail delivery due to icy roads on a Thursday 11 days later. It doesn't take much to shut things down here.

Well... we all know that Christmas is a much bigger deal for a lot more people than Hanukkah is in the United States, and that is especially true here in the South. The last time it showed on Christmas was 1947. Raleigh had 0.4" (1 cm) of accumulation before midnight last night so it was officially a white Christmas. Of course, the snow didn't stop at midnight... 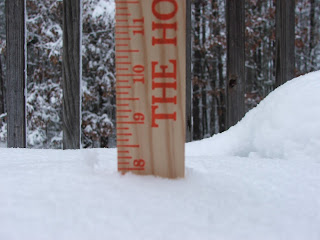 As of an hour ago we had 8" (20.3 cm) of snow with another inch or two possible by midnight tonight. Raleigh (RDU airport), last I heard, had 6.5" (16.5 cm). A little to our north and east heading up towards Roanoke Rapids they already have 15" (38 cm) and snow is still falling. That's a big deal around here and the whole state of North Carolina is under a state of emergency. It's below freezing so we are also under a black ice advisory for tonight and tomorrow. 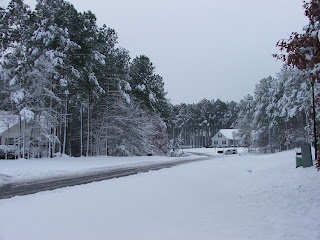 Much to my amazement the road I live on has already been ploughed. They usually clear the main roads around here on the first day but a little one like mine usually takes a day or two more if things don't melt away. So... despite the icy conditions as things refreeze and state government asking people to please stay home cars are flying up and down my street. Idiots! I hope the accidents they cause don't block my road tomorrow. There is only one road out of the community I live in. 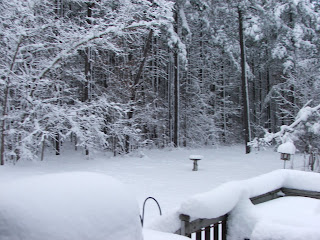 I shoveled a path out to the street from the front door. I also cleared the area in front of the garage where the snow piled up just in case. I don't have to go anywhere tonight so I am staying home. I'll make a nice dinner and give the ferrets a good, long playtime. There is nothing so important that compels me to go out and drive on black ice. 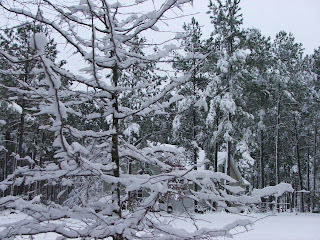 My best friend is up north with her family and she insists she is still driving home on Tuesday. Somehow I don't think so. The area she's in is supposed to get 15-20" (38-51 cm) of snow tomorrow. Sure, the interstates will likely be cleared by Tuesday but the roads to and from are another matter. There won't be much melting by Tuesday anywhere between here and there. The forecast is for more cold weather with a warm up starting on Wednesday.

Anyway, I hope those who enjoy a white Christmas are happy. I hope everyone is having a great holiday season, whichever holiday(s) you choose to celebrate. 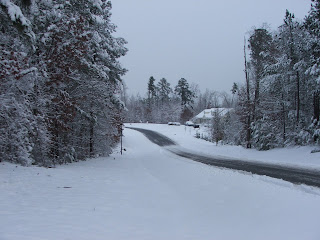 Posted by Caitlyn Martin at 5:15 PM No comments: